How climate change will impact business in Russia

Russia is the world’s fourth largest emitter of greenhouse gases. It is warming 2.5 times faster than the planet as a whole. 2019 was the hottest on record in Russia, and scientists now estimate that the frozen taiga will melt completely in only 30 years, resulting in a one-time release of millions of tonnes of carbon dioxide that is currently trapped in the ground.

Meanwhile, along with most Emerging Markets peers, the Russian government is often criticised for what is deemed an insufficient response. Yet, Russian business has started adapting to the pressure of global opinion and embraced initiatives to combat climate change.

According to some critics, Russia has, behind closed doors, welcomed the melting of Arctic sea ice. The Northern Sea Route could potentially reduce delivery times between Europe and Asia by weeks. In addition, Siberia’s newly exposed permafrost soil is now being tapped for oil production.

September 2019 saw an U-turn by Russian President, Vladimir Putin, who had previously declared global warming a natural phenomenon. He ratified the Paris accord four years after its creation. This agreement means Russia must commit itself to reducing carbon dioxide emissions to 70% of the 1990 level. This is a simple goal, given that 1990 had seen the peak of USSR emissions. In fact, Russia can increase its emissions from the current 1.8 gigatonnes a year and still meet commitments.

Many attribute the decision to large demonstrations in northern Russia against the lack of waste management and the poor control of forest fires in Siberia. Extreme storms have become more common. Some young people have taken inspiration from Swedish activist Greta Thunberg, starting their own equivalent of the Fridays For Future protests.

Moreover, commentators saw a link with US President Donald Trump’s decision to abandon the fight against climate change. Amid the outcry that followed, Russia may have sought to garner international esteem by doing the opposite. The Paris Accord ratification was just the first step, with the National Climate Plan being introduced soon after. The latter sets a legal target to reduce carbon dioxide emissions and creates a federal fund that is to help lower emissions.

First phase: Carbon dioxide emissions reporting will be mandatory for so-called regulated entities with more than 150,000 tonnes of emissions annually. The government is to monitor, collect and publish data on emissions by sector and company. In addition, carbon footprint reports must be audited by authorised agents.

Second phase: Carbon dioxide quotas and targets will be imposed on regulated entities. Verified emission-reduction investment projects will receive government support; a system of carbon quota trading will be introduced; and exceeding emissions quotas will be subject to penalties. However, the plan has been criticized for its lack of concrete mechanisms, and many of the initial plans were watered down after pressure from industrial groups.

The globalised world means Russia’s economy is now more susceptible to international opinion than ever.  ESG (environmental, social and corporate governance) rankings are increasingly important to businesses. In 2019, some of Russia’s largest raw material producers have reported a loss of up to a third of their equity investors as fund managers demanded that companies implement a sustainable model which includes ESG factors. Consider, for instance, Norilsk Nickel, a Russian mining company and the world’s largest producer of palladium, which has already spent US $2 billion on an emissions clean-up programme. The definition of a sustainable business model is still murky: whilst corporate governance is an established part of ESG, the criteria used to measure the sustainability of an investment are still up for debate.

There is still a long way to go, given fossil fuels accounted for around two-thirds of all Russian exports in 2019, and Russian companies continue to feature prominently on the list of businesses that have produced the most greenhouse gases in recent decades. Behind the Chinese coal industry and Saudi Arabia’s Aramco, Russia’s gas company Gazprom has been the world’s third largest emitter since 1988. Moreover, Russia’s coal industry giants Lukoil, Rosneft, Surgutneftgas, Tatneft and Novatek also feature in the world’s top 100 biggest emitters. Given Russia’s coal production has increased by more than 30% over the past decade, the idea of implementing effective climate crisis management will be hard to justify. 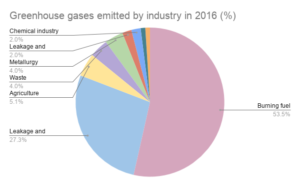 Alexander Krutikov, the deputy minister for the Far East and Arctic, gravely predicted that economic losses caused by the melting permafrost could range between 50 billion and 150 billion rubles a year, around US $2.3 billion. Moreover, Russia’s Audit Chamber has declared climate change will shrink Russia’s GDP by 2-3% by 2030. Vladimir Putin’s senior advisor on climate change, Ruslan Edelgeriev, noted in early 2020 that Russia needs to reduce its dependence on fossil fuels.

When it comes to the corporate world, changes are coming even faster, as many companies have felt compelled to invest heavily in climate friendly initiatives in order to maintain the support of portfolio investors. Investors are changing their mind about long-term returns, with emphasis towards sustainability overshadowing the goal of mere profit. It has been described as a slow moving change, but one with the momentum of a glacier.

In January of 2020, the government announced further measures to be incorporated into their plan. These include preventive measures such as dam building, a push for more drought-resistant crops to be planted, and emergency vaccinations and evacuations plans prepared for potential catastrophic events. Among these 30 measures, the Government is looking to evaluate the risk of Russian products becoming uncompetitive and failing to meet new climate-related standards, as well as prepare new educational materials to teach climate change in schools. The international scrutiny facing Russian businesses means they will need to, at minimum, adapt to satisfy 21st century expectations.

How Wagner & Experts is adapting

At Wagner & Experts, we recognize that climate change is the biggest issue facing the world this century. We base our business strategy and company culture on Western best practices, therefore we have implemented our own ESG strategy to ensure we continue to exceed international expectations of forward-thinking businesses. We believe sustainability is necessary for longevity and success. Not only do we intend to reach net-zero status during 2021 through careful choices about our carbon footprint, but we are regularly updating our internal policies to comply with new regulations.